This November we hadn’t even been planning on going to Qatar until we found some cheap flights to our final destination with Qatar Airways. Naturally, they fly through Doha, Qatar, and provide some options in terms of layovers. We took the option of a 21-hour stopover so we could run around Doha and this is an outline of our one-day trip to Qatar.

We arrived at 6 AM and first had to freshen up in the bathrooms. There were no seats around, so while one of us went in, the other waited outside seated on the ground. An airport worker came to us asking what we were doing on the ground and we just said that there were no seats and he yelled at us to get up and find some. We took another 10 seconds to gather our things and he yelled once more to get up. Needless to say, it was not a good first impression of Qatar.

Qatar requires most foreigners to pay for a visa, which costs 100 QAR (30 USD). Customs was quick and painless, particularly because we didn’t have anything with us but a small backpack as our luggage was checked through to our final destination. We then looked for signs for the bus to the city center.

Note: Qatar’s public transport is quite poor and confusing. Most people we talked to hardly knew there was a bus at all connecting the airport and the city.

As ritzy as Qatar is trying to be, the buses and taxi drivers do not take card so we had to exchange some Euros for Qatari Riyals. Eventually we found the bus (Number 747) and paid the bus driver 10 QAR (3 USD) for the two way Karwa Smartcard. That card got us from the airport to Doha and back. Most Westerners take taxis, so when we were the only ones on the bus along with a few Indians, we knew we were taking the most economical route.

We, like many others, had been expecting Doha to be all glamor, yet the bus takes you to the one side of the bay that is anything but. We arrived not knowing if we had made it but the bus driver assured us, so we got off and started walking.

We strolled a bit and began noticing the hordes of men sitting around on the street in groups, just chatting. 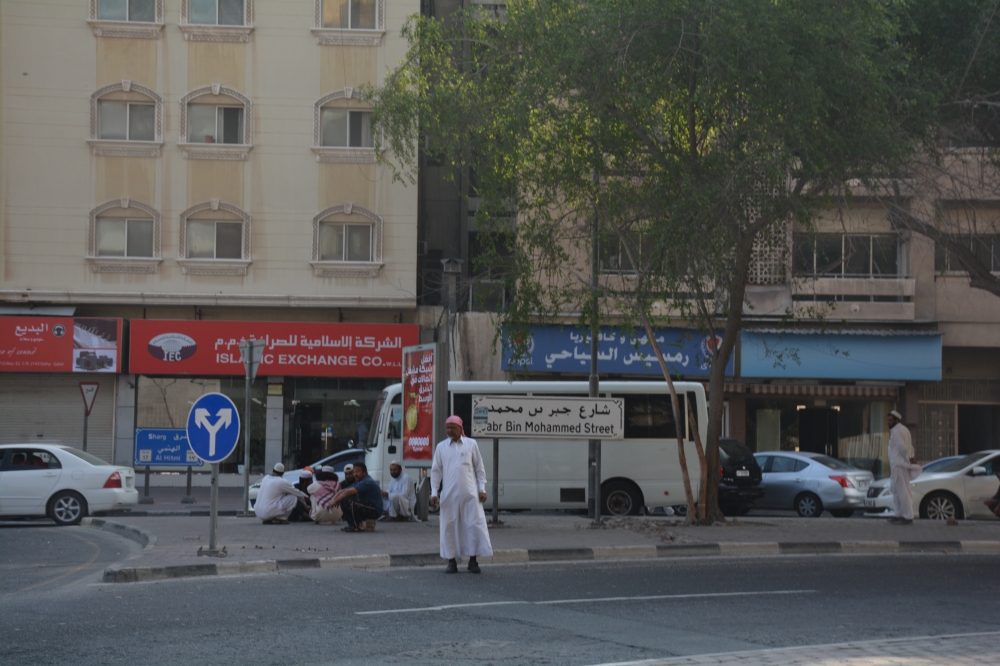 The streets were almost filled with men not doing much so we quickly continued towards Souq Waqif Market, a popular tourist destination. 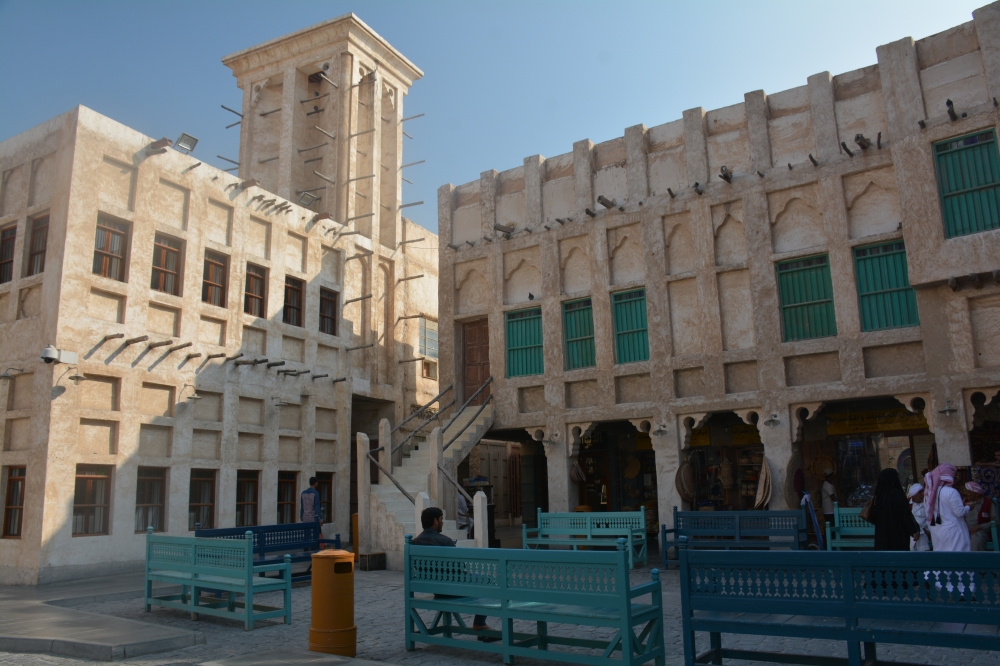 Souq Waqif has clothing, food shops, spices and birds – yes, birds. In fact, the streets were incredibly loud from the chirping of the birds in their cages. Mainly pigeons and parrots along with a few other animals are sold in this outdoor pet store but I must forewarn about the stench. 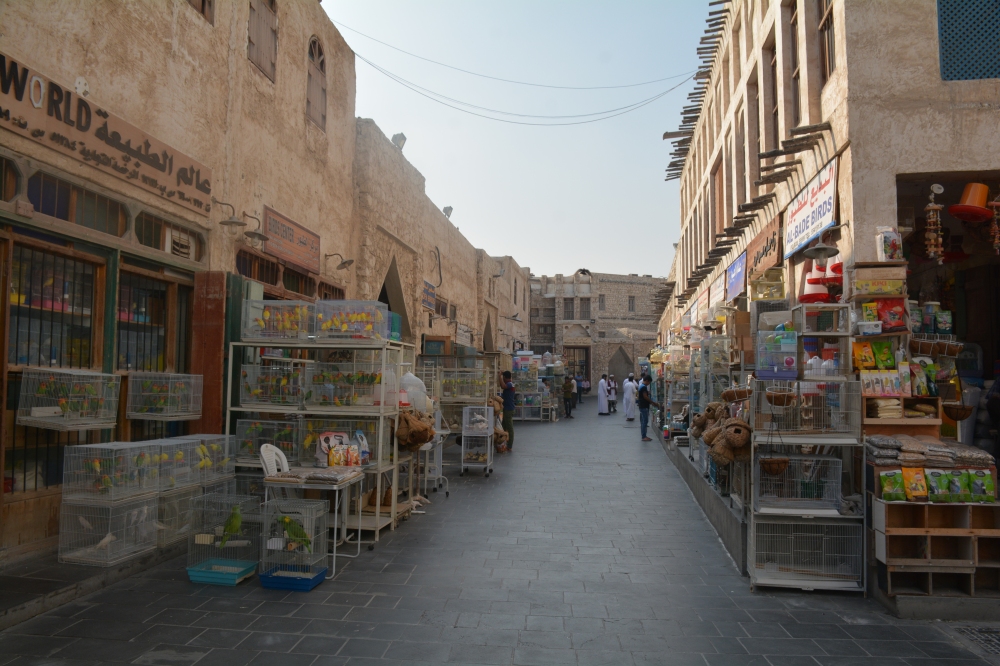 We stayed only half an hour weaving through the small streets of Souq Waqif before we finally caught a glimpse of the Doha you see in photos. 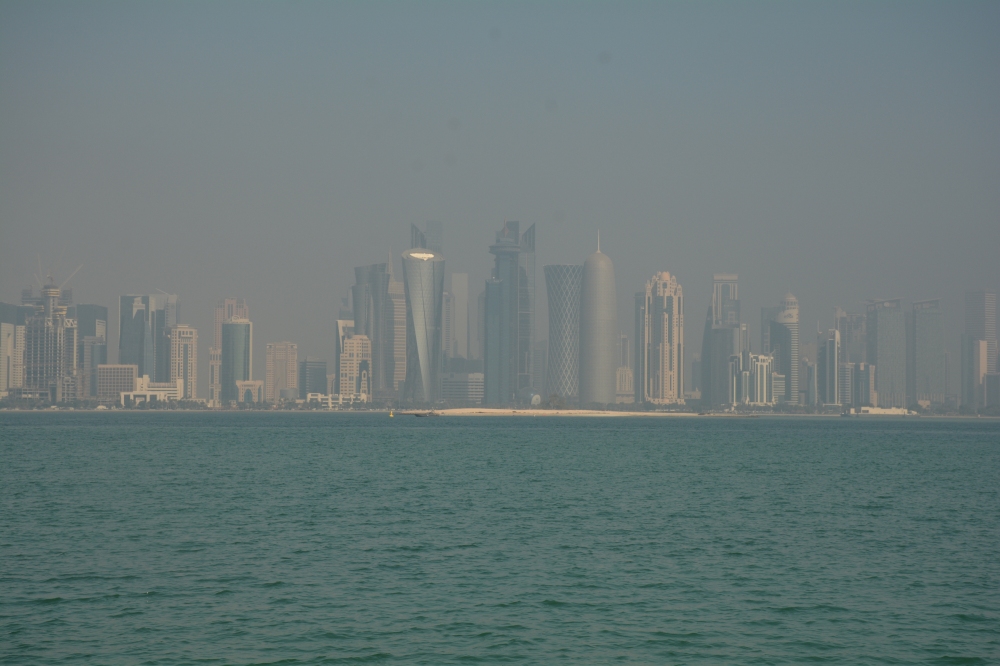 It’s situated on a bay and since we were dropped off on the older side, we had to walk around a large semicircle to reach West Bay and its skyscrapers. To walk from one side to the other is a bit over 5.5 km (3.5 miles) and though we started early, the Middle Eastern heat (even in the winter!) got us. It was about 30 ºC (86 ºF) and the shadeless walk took us a couple of hours, partly because we had to lay down underneath a tree for a recuperatory nap! 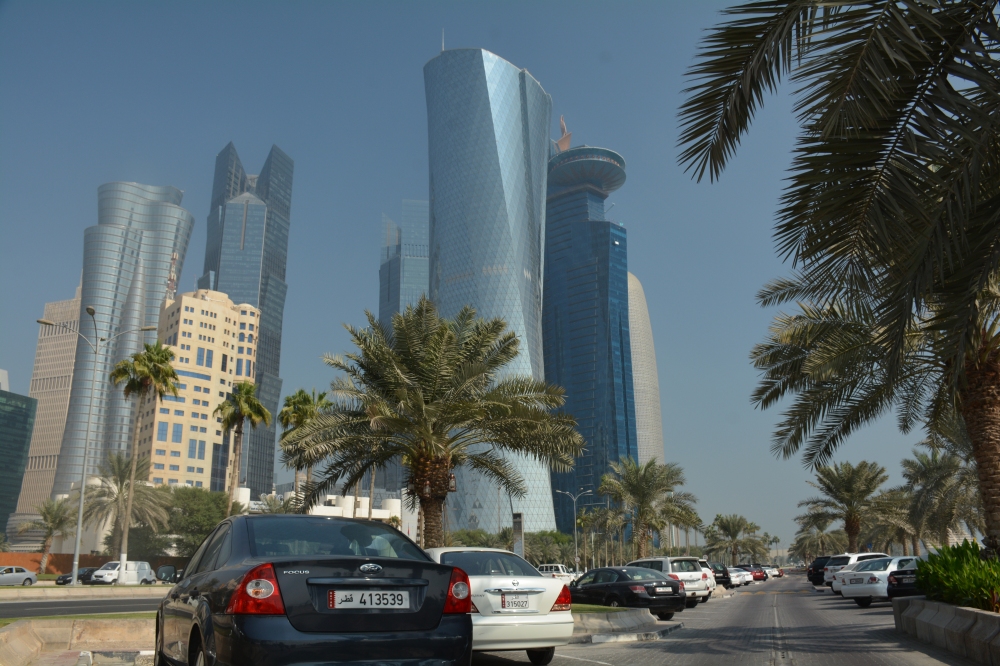 At last we arrived to the skyscrapers and while the city is bustling with cars there is no one on the streets, meaning, no one as crazy as us. 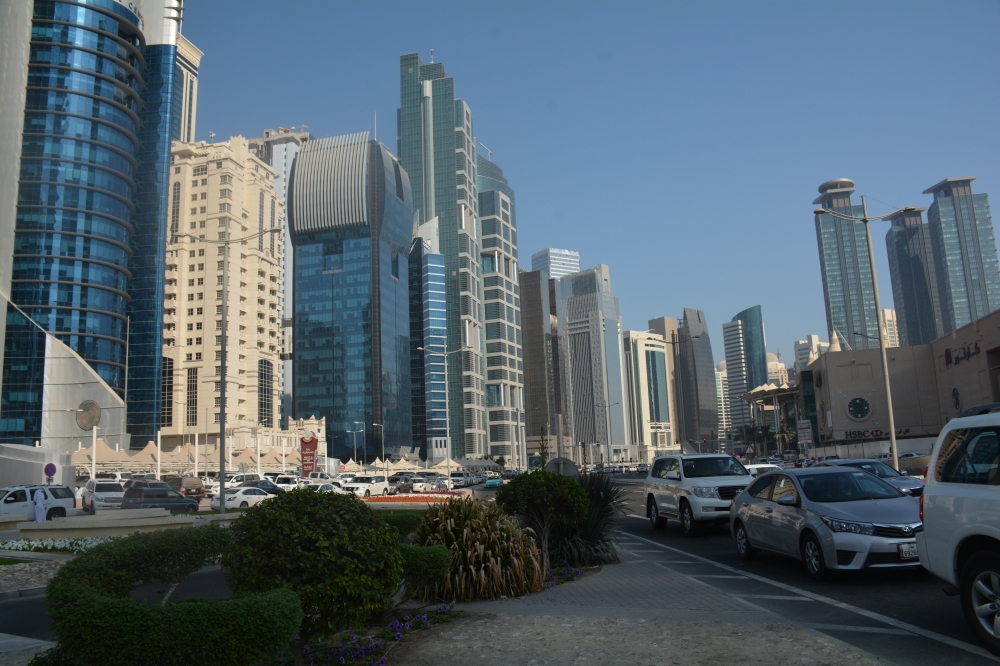 We needed a bit more rest and at the same time we wanted to see what their grocery stores looked like so when we spotted Carrefour (AKA the French version of Walmart), we couldn’t have been happier! Visiting grocery stores of the same brand makes for one of the best comparisons between countries. The layouts of the stores are the same but the items are tailored to each country’s tastes. 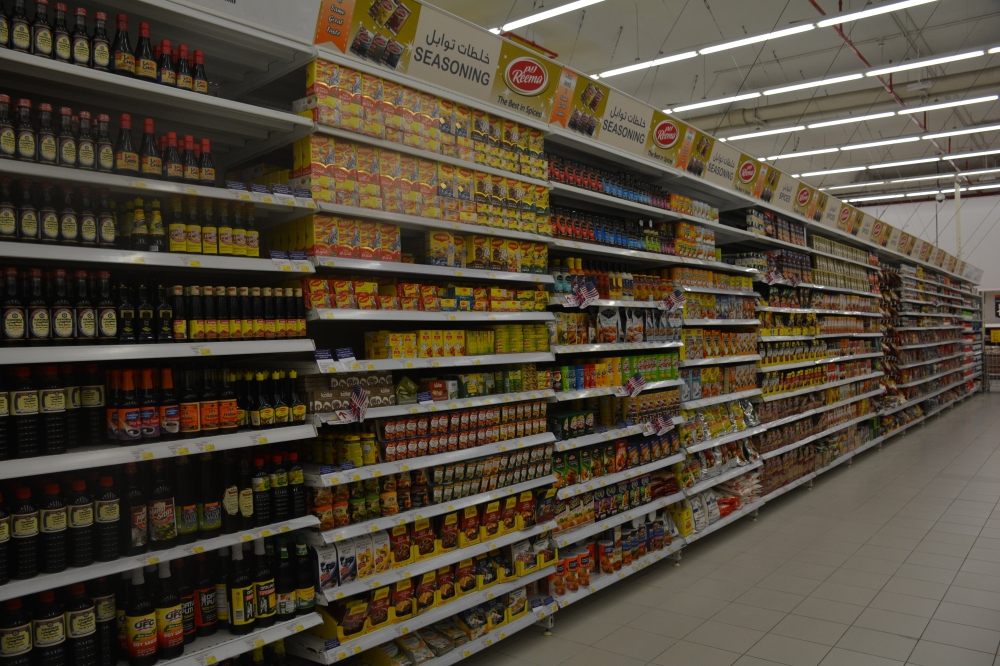 And the taste of Doha is amazing! So many spices and sauces and varieties of just about everything from noodles to cookies to spreads to produce. Granted, Carrefour is one of the biggest grocery store chains but even in Spain’s Carrefour the variety doesn’t exist. It makes sense though, considering Qatar is a country of 2.3 million people with over 2 million being foreigners! Yes, around 10% of the population is Qatari. With so many people from India, Nepal, and many surrounding countries, it’s no wonder their grocery stores are filled with such variety.

After resting a bit in the grocery store’s mall, we decided to make the trek to The Pearl, the manmade islands like the Palm Islands of Dubai. We knew the walk was about 8 km (5 miles) and we thought with a bit of luck (and shade) we could make it. There are no buses to The Pearl. We had just started and only got about a kilometer before all of Doha’s construction prevented us from going further.

The entire city is under mass construction. The roads are being widened, the skyscrapers and hotels are going up, the islands are being built and that doesn’t even begin to describe how much construction is really going on in Doha. This is all being done alongside the immaculate stadiums under construction for the 2022 World Cup. So the sidewalk ended on our way to The Pearl and there was no way we could walk on the 4-lane highway. We turned back and agreed on taking a taxi, something that I hate doing, but considering we still had the rest of the afternoon and really wanted to explore The Pearl, we took one regardless.

It was a mess getting a taxi because you bargain on the price before you enter the car. We had to ask several drivers before we seemed to get the cheapest price, which was 35 QAR (11 USD). Our driver took us to one end of The Pearl so that we could walk around the loop-shaped island ourselves. The Pearl is basically a giant mall. There are identical hotels/apartments that circle the loop along with endless yachts in the water. 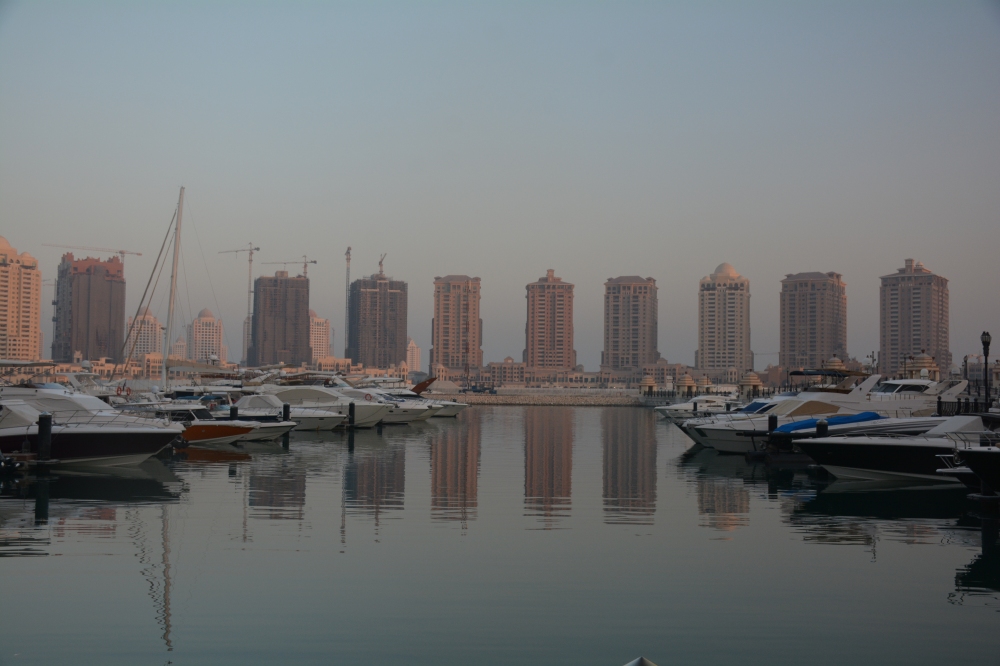 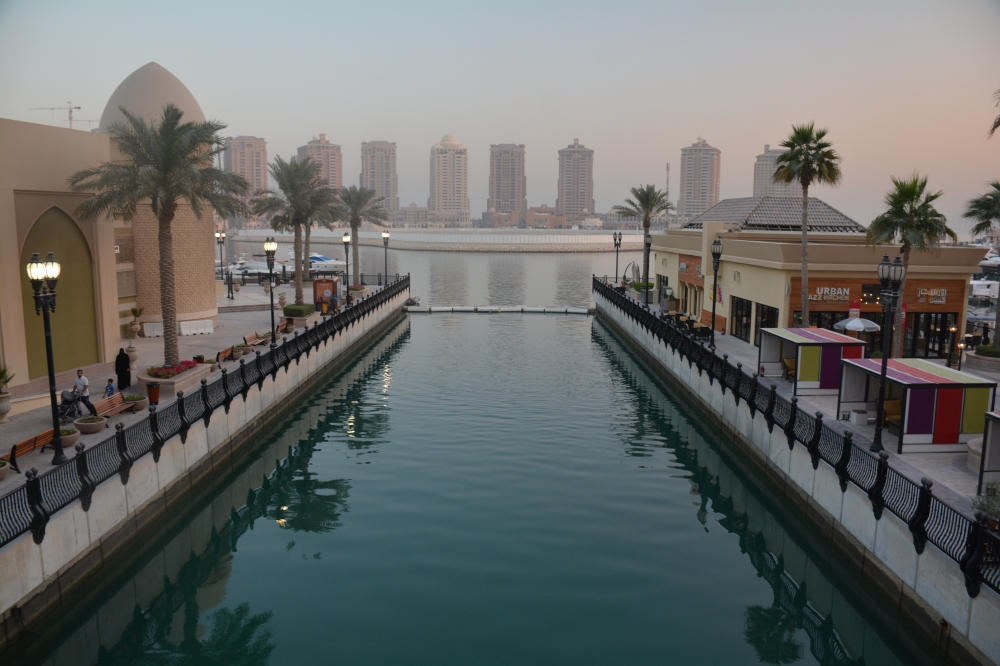 It felt deserted considering how big it is and the only visitors were Qataris and a few Westerners. Qataris are easy to spot because the men wear all white thobes and the women all black abayas. 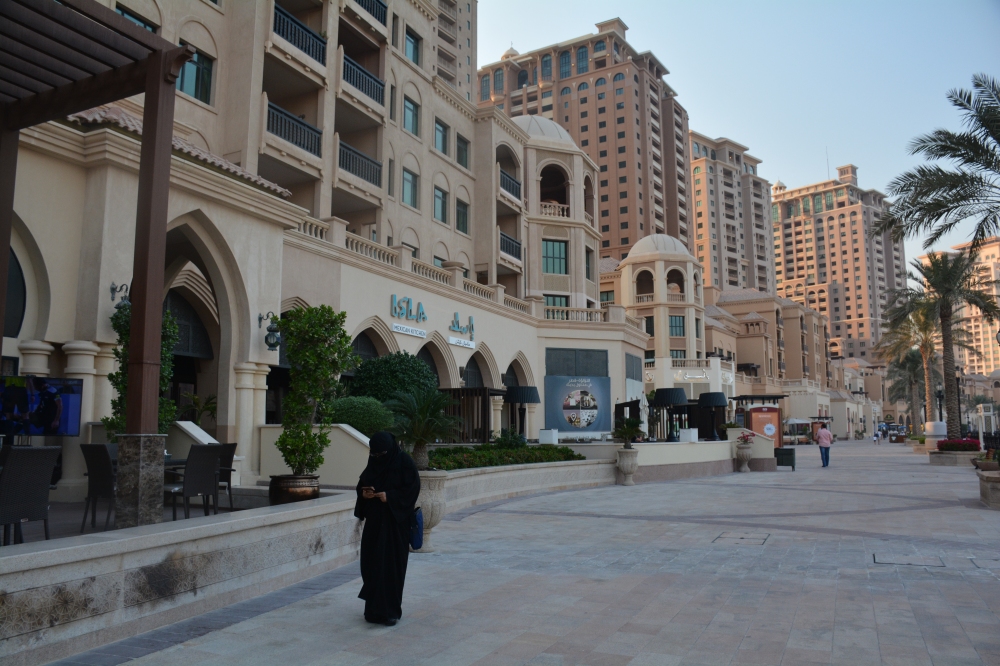 Given that there was hardly anyone there, we felt we stood out. In any case, we walked the loop that’s full of high fashion stores and restaurants and into a plaza before sunset. 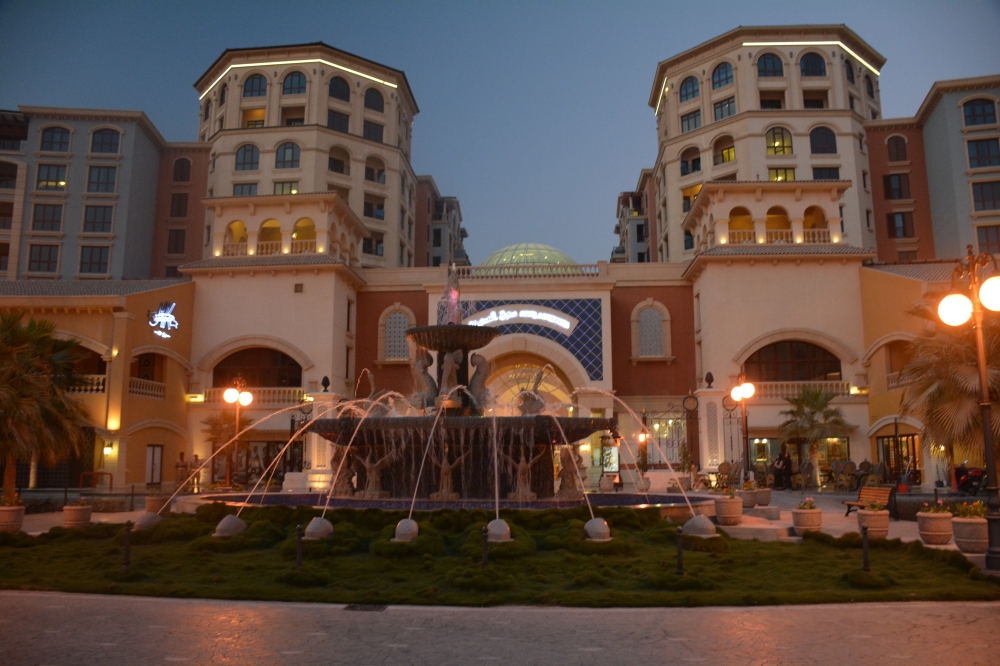 Just as we were about to catch a taxi back, we spotted a caravan of buses going to pick up all the foreign workers who are building the hotels/islands/apartments/shops, etc. There must’ve been thousands of them and, as orderly as they could, they boarded the buses to be taken to their labor camps where they eat and sleep. 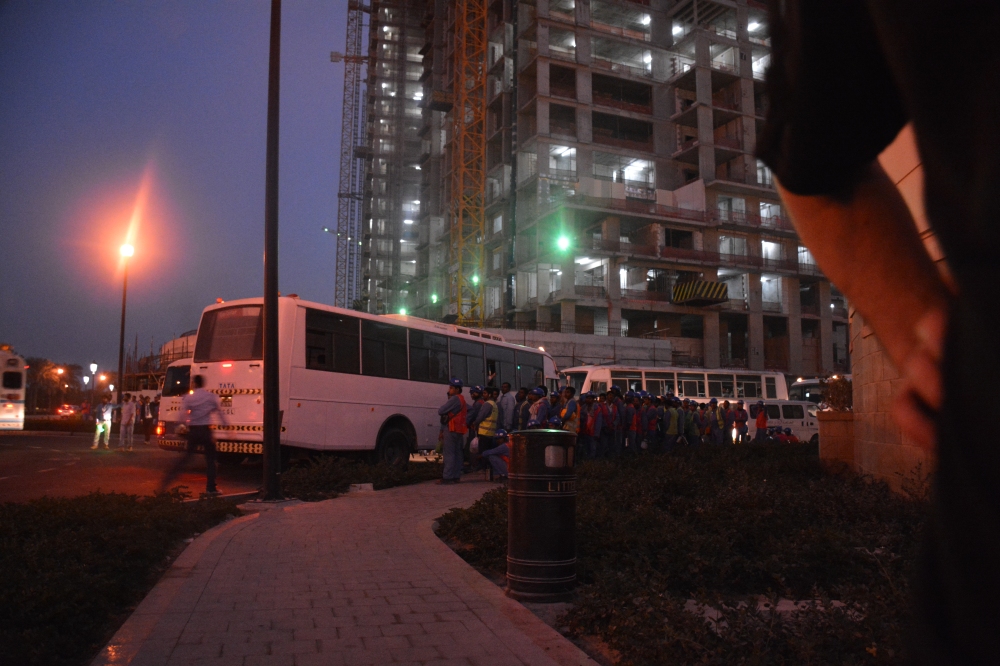 Our taxi driver laughed with us back to the city center about how gorgeous Spanish women are and how he needs a Spanish wife and then we bid adieu. We spent the last of our Qatari Riyals at Carrefour and on gelato before we found bus 747 outside the mall to take us back to Doha’s airport. 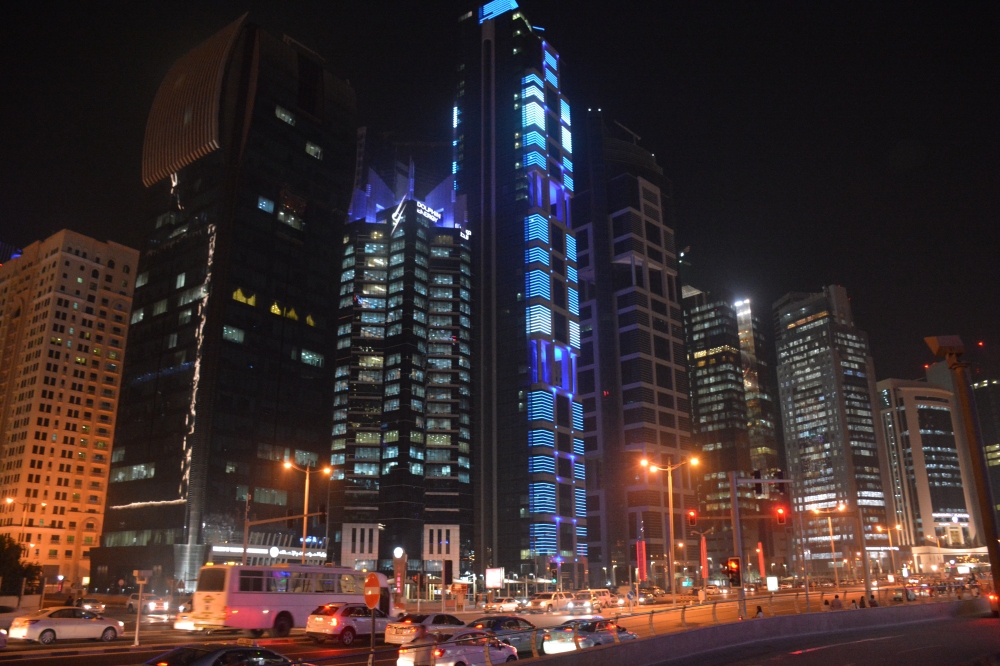 Our flight was leaving at 3 AM, but you wouldn’t have known it considering how busy that airport is in the wee hours of the morning. 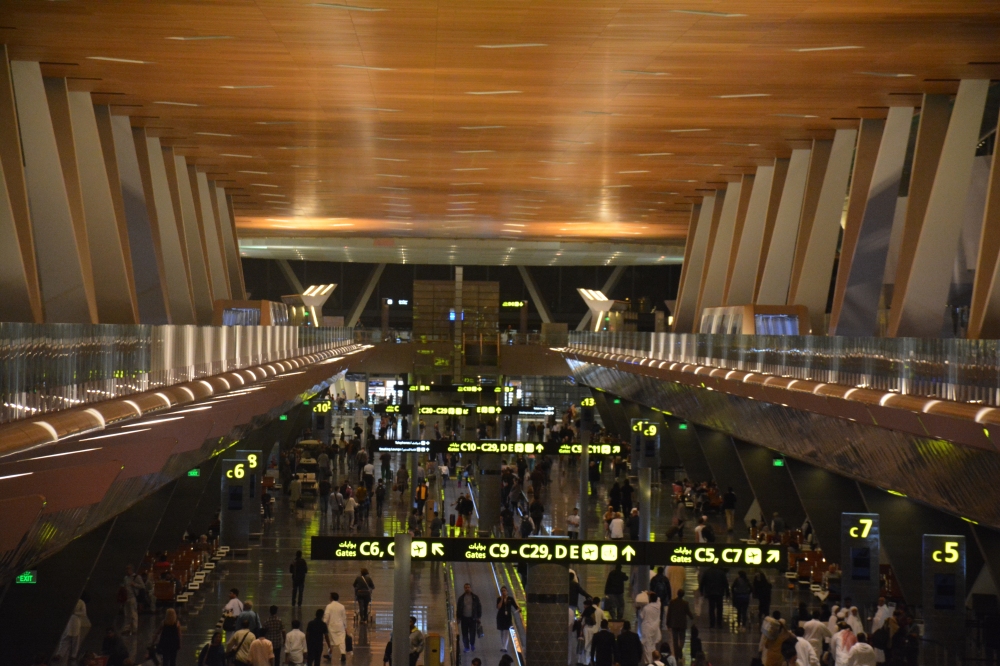 Doha can easily be seen in one day and it is surprisingly affordable considering how much money the Qatari nationals earn, as the citizens are by far the richest in the world in terms of GDP per capita. I would recommend a long layover such as ours to explore and see what oil wealth can do, because it really is quite astounding.